Is there anything more endearing than Zendaya and Timothee Chalamet‘s friendship? Fans don’t think so. The Dune co-stars have, since the time they met on the sets of the film, been inseparable, always giving us friendship goals. Timothee is celebrating his 27th birthday and the much-awaited wish from Zendaya arrived in the form of an unseen picture of the duo. The Euphoria actress posted a photo on her Instagram Stories, in which she can be seen getting ready for a magazine cover shoot with Timothee laughing in the background. She looks stunning in an orange dress while the birthday boy can be seen wearing a turtleneck tee with white trousers and a brown jacket. “Happy birthday to this kid, Timothee Chalamet,” wrote Zendaya in the caption. The BTS image is from Entertainment Weekly’s digital video covers for one of their issues. 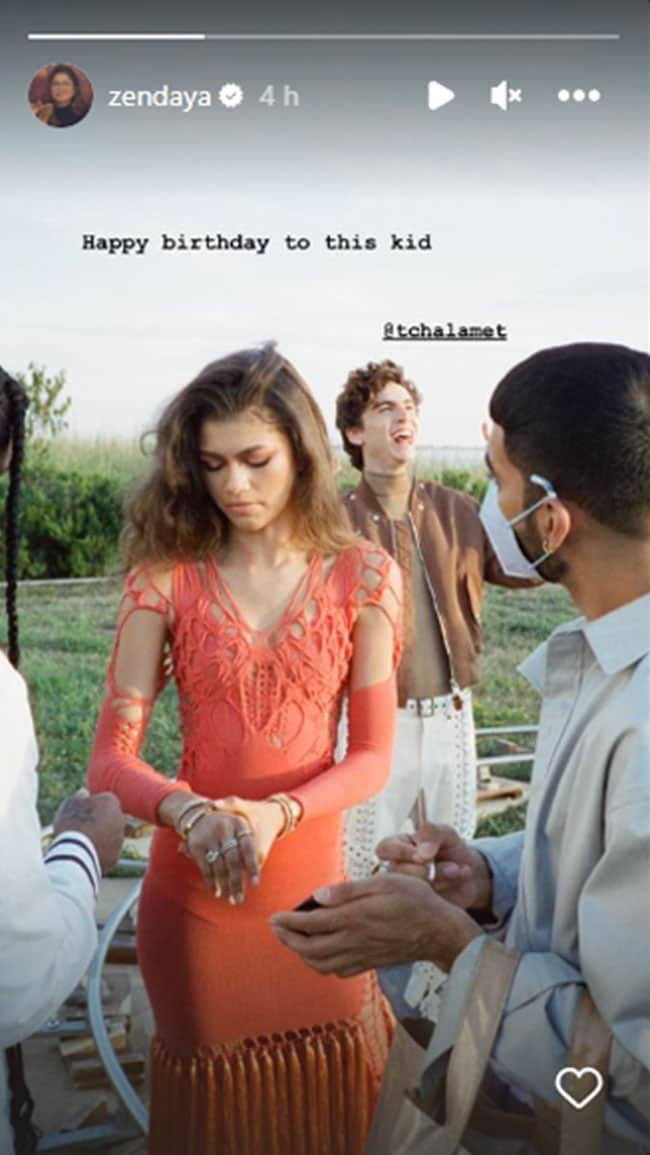 Ever since Zendaya and Timothee Chalamet met for the shooting of Dune in 2019, they have become the best of friends. On social media and even at awards and premieres, the duo have given us major friendship goals. Remember when on Zendaya’s birthday in 2020, the Call Me by Your Name actor described her as “one of the most inspiring people” he has ever met? Timothee, in that post, also discarded relationship speculation by calling Zendaya a “friend.” It read, “Happy birthday to one of the most inspiring people I’ve met on my short journey. Someone with the strongest ethical character, and a moral compass that is in harmony with a totally fearless creative abandon. Happy birthday, Zendaya. Hope your day is beautiful, friend.” Her reply was equally heartwarming: “Yo, you bout to make me tear up over here man, thank you for this, I appreciate you very much.”

Yo, you bout to make me tear up over here man, thank you for this, I appreciate you very much… https://t.co/vbRMTQZK6e

Timothée Chalamet and Zendaya hyping each other’s fits up on the red carpet for #Dune tonight in London pic.twitter.com/Q7r2zIwIHZ

Recently, in an interview with Variety, Timothee Chalamet described Zendaya as his “sister.” Talking about filming Dune 2 with her, he said, “And she’s really become a sister. I’m so grateful to count her as a partner, a sister and a friend.”

Zendaya and Timothee Chalamet’s Dune 2 is expected to release in November, next year. The first part won big at the Oscars 2022, including Best Picture, Best Visual Effects and Best Production Design.

Karan Johar Pictured At Airport With Kids Yash And Roohi

11 hours ago Get Infomation

12 hours ago Get Infomation

8-Year-Old Boy Drowns In Pit Outside School In Gujarat: Cops

45 mins ago Get Infomation