Hrithik Roshan is all set to welcome the new year with his family and his girlfriend Saba Azad in France. The actor, who flew out of Mumbai a few days before Christmas, is having a wonderful time with Saba and his sons Hrehaan and Hridhaan in Courchevel, a ski resort in the Alps. The actor is also accompanied by his cousin Pashmina, who is all set to make her Bollywood debut, and Eshaan. On Wednesday night (Thursday morning in India), Pashmina posted a group photo from her dinner date with her cousins and Saba Azad. In the snap, Hrithik is seen smiling for camera. The picture also features Saba Azad, Pashmina and Eshaan also opted for black and white attires. “My favourites,” read the caption by Pashmina. Take a look at the photograph here: 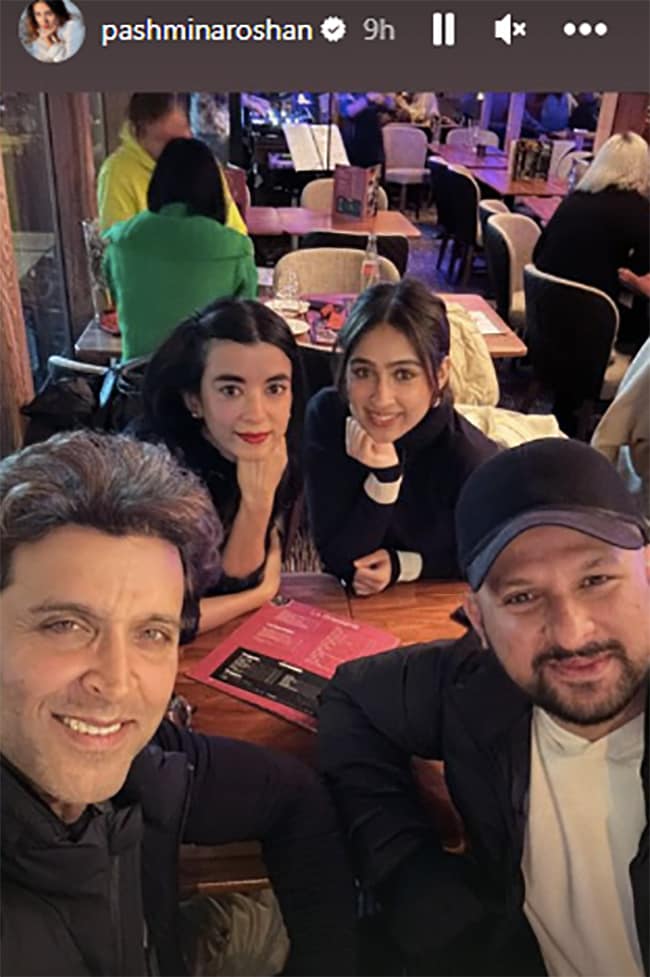 This isn’t the first group photo from Hrithik Roshan’s holiday with his family and Saba Azad. Earlier, on Christmas, the actor wished his fans with a fun photo of them posing at a snow-clad skiing location. In the caption, he wrote, “Merry Christmas beautiful people.” The actor, his family and Saba are seen posing with black umbrellas on a snowy mountain.

More glimpses of the vacation have also been shared by Pashmina Roshan online. Here, she is seen in a perfect skiing mood.

That’s not it. Pashmina Roshan also shared breathtaking views from Courchevel in a separate post. It was “a magical evening walk” for her.

Pashmina Roshan will make her Bollywood debut with the second instalment of Shahid Kapoor’s debut film Ishq Vishk. She co-stars with Rohit Saraf in the film.

About Hrithik Roshan and Saba Azad, the couple reportedly started dating in January this year. They are often spotted together in the city. Saba is also seen at the Roshans’ get-togethers.

On His 57th Birthday, Salman Khan Greets Fans From His Balcony

3 Dead After Ambulance Collides With Truck In West Bengal: Cop